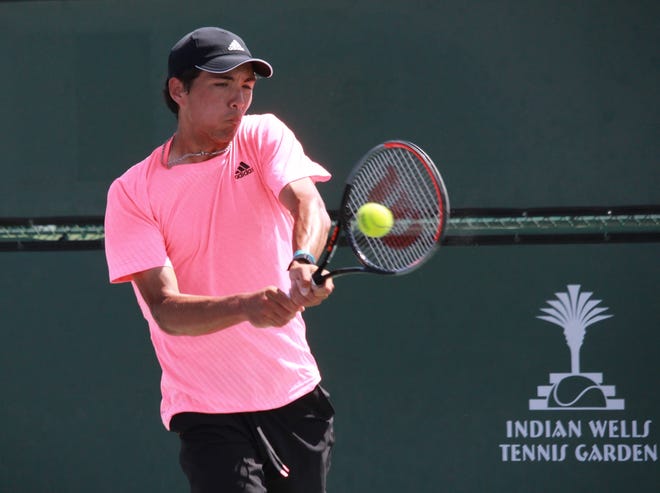 At the Easter Bowl, New Jersey’s Evan Wen is having a big week

Prior to his Easter Bowl run this year, three herniated discs kept Evan Wen from playing tennis at a high level for a solid year. The Morristown, NJ, high school student walked away from the courts before returning in late December.

Wen played in a handful of games earlier this year and took part in the Easter Bowl, the prestigious junior tournament played in Indian Wells, ranked 401 in the ITF Junior Rankings.

That number is sure to rise after this week, and especially after Wen beat Ethan Quinn – the 18-year-old boys’ top seed – 6-4, 0-6, 6-3 on Thursday at Indian Wells Tennis Garden. The win was Wen’s fifth this week at the Easter Bowl, including a pair of qualifying victories, moving Wen to 5-0 following victory over Quinn, the Fresno native who was ranked 20th by the ITF.

“He beat such top players and he was definitely a bit tired after playing many weeks,” Wen said of Quinn. “I was like, ‘He’s got all the pressure. Just let me come here and compete.

After winning the first set, Wen fell behind with a double break in the second and said he didn’t put much energy into trying to get back into the set. He instead conserved his energy for the final set and the strategy paid off. He lost the first game of the third set before holding serve and breaking early to take control of the set and the game.

Continued:American men are experiencing a resurgence in tennis. In Indian Wells, they took a leap forward

Wen, who is 6-foot-1, trains at the John McEnroe Tennis Academy, with former Grand Slam champions John and Patrick McEnroe, in New York. He first became interested in tennis at the age of 6, when his parents took him to the US Open final.

“I came in and didn’t want to leave the seat all the time,” Wen said. “It was the most amazing thing I’ve ever seen.”

Rafael Nadal beat Novak Djokovic in an electric four-set men’s final between two of the greatest of all time.

“When I saw Nadal lift the trophy and do the biting thing,” Wen said, “I was like, ‘I want to do this.'”

It’s a lofty goal, to be sure, but this week at the Easter Bowl, Wen prepared for a comeback year that could take his chances of future success in the sport to another level.

This is the goal of Wen, whose back no longer gives him serious problems.

“I’m definitely very happy with my recent results,” Wen said. “I feel really good about this one.”

Andrew John covers sports for The Desert Sun and USA Today Network. Email him at andrew.john@desertsun.com and find him on Twitter at @Andrew_L_John.