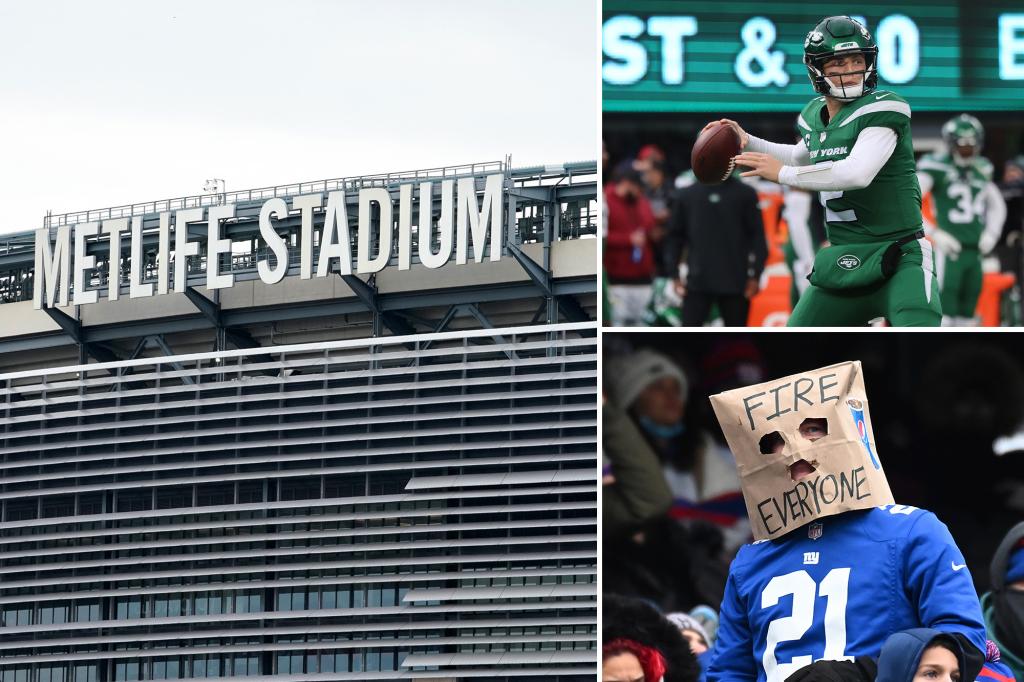 That’s quite a Hail Mary!

A pair of New York football fans have called an audible in their $6 billion class action lawsuit against the Jets, Giants and the National Football League.

They modified their suit which originally required both teams to pack their pads and leave Garden State for the Big Apple.

Now they’re making a slightly more manageable request – teams can stay in New Jersey but have to drop “New York” from their names.

“New York City is the Big Apple, home to the Statue of Liberty and Ellis Island, Wall Street and the Stock Exchange, the ticker tape parades of Broadway musicals…” states the amended lawsuit before Manhattan federal court filed last month.

“MetLife Stadium is located in the swamps of East Rutherford, NJ…, which has a population of less than 10,000, the 116th largest city in New Jersey. It’s not exactly an exciting and romantic destination[,] and the Giants, Jets and MetLife Stadium have absolutely no connection to the city, county or state of New York.

Plaintiffs Abdiell Suero and Maggie Wilkins insist they were duped by false advertising and other fraudulent misleading practices into believing the Giants and Jets were still playing in New York and shelling out green to see Blue Blue and Gang Green play at MetLife Stadium.

Suero, who describes himself as a football fanatic, told the Post he was shocked a few years ago when he found out his beloved Giants were actually called East Rutherford, NJ, as their home. It was then too late because he had already bought tickets.

The Manhattan-based financial representative joked that the experience was as unbearable as watching Joe Judge coach the Giants in recent years – and the schlep at MetLife made the experience even worse.

“I spent more time traveling to get to the game than the game actually took,” said Suero, 32, the lone complainant in the initial complaint filed in January.

After the league and clubs mocked the teams’ request to return to New York as a Mark Sanchez ‘fumble’, the complaint was amended late last month with the new request.

The amended request also asks MetLife Stadium to drop its “cashless” concession policy that has been in place since last season, claiming it violates New Jersey law. He added Wilkins, a New Mexico native who now resides in the Big Apple, as the second plaintiff.

The class action also seeks to represent anyone who has been tricked by team marketing since 2016 into attending NFL games at the stadium.

Suero and Wilkins stepped up their argument on Monday.

Their attorney Evan Spencer has filed legal papers outlining how MetLife Stadium and the rest of the Meadowlands Swamps were once a haven for illegal toxic waste dumpers – as well as traditional waste disposal businesses – and should never be confused with the Big Apple.

“Not only is the Meadowlands not in New York, but it was the site of one of the nation’s largest dumping grounds for decades before defendants’ stadiums were built on it,” Spencer wrote, demanding that the business is progressing.

He also claimed that the defendants only recently cleaned up the MetLife Stadium website after the lawsuit was filed to clarify that the venue was not in New York.

The NFL, Jets and Giants filed legal documents on April 25 seeking the dismissal of the lawsuit, insisting that the teams’ “continued use of ‘New York’ as part of their team is not misleading at all – it just refers to the teams hometown.”

“These claims are calculated to score points in the headlines – not in the courtroom,” their lawyers wrote.

They also noted that MetLife is just 7 miles from Manhattan – which is well within the 75-mile radius covering the teams’ NFL territory rights that cover parts of New York, New Jersey and Connecticut.

Yet Giants 2022 first-round pick Evan Neal recently admitted that even he thought Big Blue played in New York until he was drafted by the club last month.

“I didn’t even know the Giants were in Jersey. So that was news to me,” said the Florida native and former University of Alabama star, laughing, speaking to reporters two weeks ago. “I thought they were in New York.”