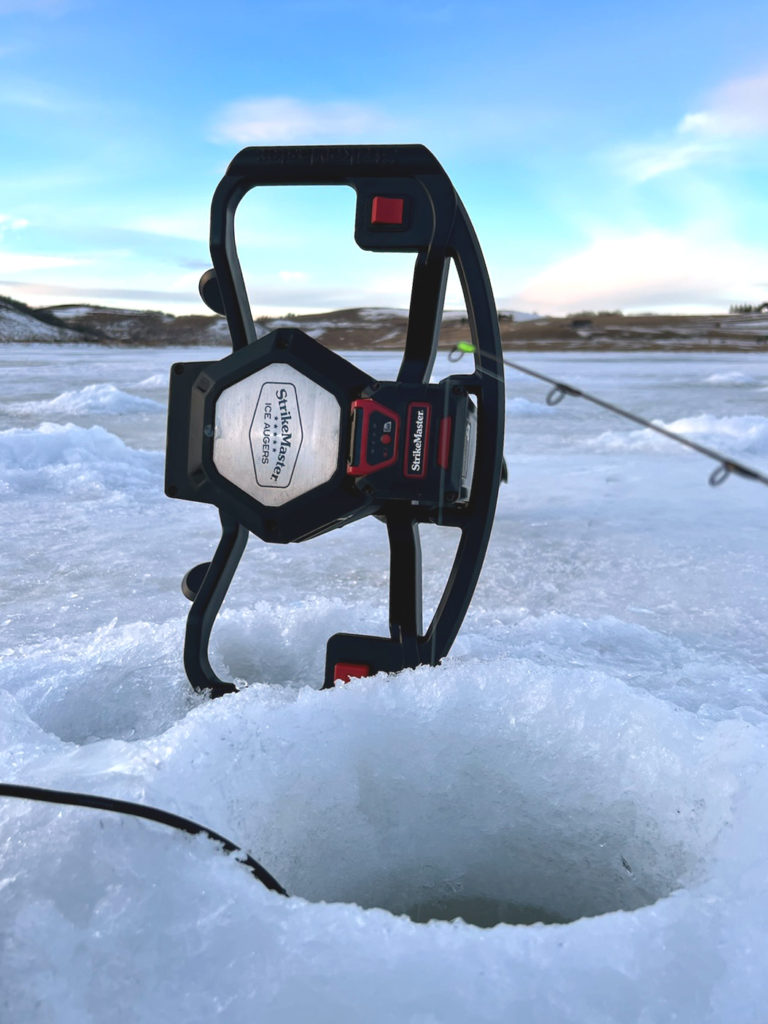 Cutting edge. An electric auger has remained competitive with gasoline-powered models owned before it and author’s expectations this ice season. Photo Simonson.

I recognize a strange duality in how I approach the outdoors with technology – low-tech or high-tech learning – and the options available to me for any given trip on the water allow me to indulge on either side of this medal.

On the ice I was an early adopter of sonar, begging and begging for a Vexilar FL-8 for Christmas one year and not fishing the first week of the holiday until I received it in my bottom, judging the inability to see what was below to be such a handicap for a successful exit. Other times I dodge the sonar all together, even leaving an old portable model at home to hunt trout on the fly from the front of my 16ft aluminum off-brand puddle jumper without the beep and scrolling of the small screen. With fishing, it depends on the situation, I guess.

Then there are also times when I stare at a display in the sporting goods store or look at half-page prints of new boat sonars with screens as big as the television I had growing up. (and much thinner), able to see what’s 100 feet in either direction of the boat. With a tap of the finger on the silhouette of a marked fish, one can simply make a right turn and be above it. Although it almost sounds like a cheat, the newer models offer live displays showing real fish swimming around the transducer. I would probably never take that leap unless I had to, and that’s exactly what happened this winter.

I’ve always been a gas auger guy. Mix fuel with a few drops of two-stroke motor oil on a Jiffy 30 model and burn through 150 holes with the little gas tank to find roving schools of crappie or that old sunken pile of rocks on the apartment otherwise muddy bottoms for walleyes has been standard operating procedure in my ice fishing adventures. Even though I didn’t catch a lot of fish, I still felt like I got a great back and shoulder workout. While this Model 30 was a workhorse, I swapped out the heavy yellow-headed auger for a lighter Strikemaster that promised a lighter unit with the same hole-digging capability, and it delivered. Over the past two seasons, with warmer winters, busier schedules, and an ever-open powerhouse lake nearby, my limited hard water time has caused the fuel line to constantly disconnect and a slight wobble in the water. Shaft of the aging model somewhat tolerable, but I knew time was running out on the auger by almost 10 years.

I had been reluctant to join the recent electric revolution when it came to augers. Coming over the roar and exhaust of gas-powered models, there was something cathartic about pulling one out and chewing through three feet of ice, watching the cone of splinters and slush form at my feet. The smell of fumes seeping into my lungs from the engine became as reminiscent of good times on the ice as the actual smell of fish on my winter gloves. But, like the spot that no longer produces fish after a few successful seasons, there comes a time when we all stop fishing for our memories. So I took the plunge and bought a 40 volt electric ice auger this season, a technology upgrade based a bit on necessity.

With a click of the battery and the beeping of the powerhead, I drove off, startled by the relative silence and remarkable power of the whirring blades below. I drilled a dozen holes, and while I was sure that was enough for my start on little panfish lake, I ripped a dozen more and another dozen effortlessly afterwards. Every ice cone that accumulated in my grid confirmed my purchase, as the unit swept away buyer’s remorse as easily as my shovel scraped and threw slush off the surface of the lake. There was no deafening roar and no combustion fumes, but more than enough power to start my afternoon fishing for bluegills and crappie below.

Finding a school, I chased them around the grid, picking out a few nice fish from the group of mostly smaller bluegills on the water near the subway. When they reached the edge of my area, I widened the search, ripping deeper into the depths with the power auger until I relocated them again and again. The battery light barely flickered as I approached sixty holes, and I began to think it would take a full day of drilling to turn it off as the model continued to do most of the work; the blades pulling me down, instead of doing my second workout of the day forcing it into the ice. I cursed my reluctance to not invest in an electric auger sooner, but also thought it went well with the recent release of the updated powerhead in my hands, likely eliminating the bugs of its predecessors and reducing their weight by more than three pounds. As I watched the subtle bump on the neon tip of my ice rod signaling a crappie catch against the white cone around the hole, I began to yearn for a longer winter.

It’s funny how technology can have that effect, changing the trajectory of how we fish and how we perceive any form of angling and how it should be, whether it’s in terms of comfort that keeps us going , abilities that allow us to see underwater or the ultimate success when these two elements and a school of willing fish come together. While I remain stubborn on some upgrades and know I can ditch them if the situation calls for it, it’s likely that the roar and exhaust I’ve equated with all past ice seasons will no longer be just that. a memory… in our exterior.