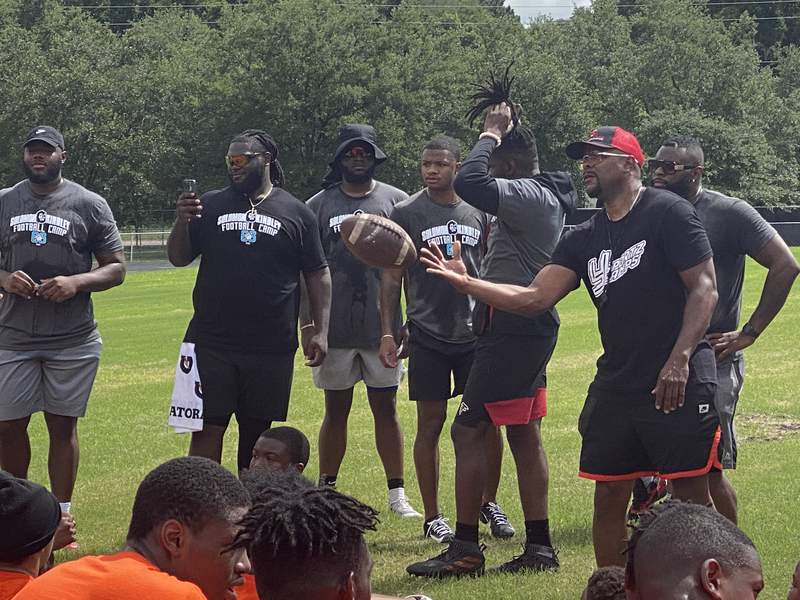 Raines graduate Solomon Kindley has a mission beyond football

Last February, he distributed laptops to 66 students in the region.

On Saturday Kindley, entering his sophomore year in the NFL with the Dolphins, was back in his element on the field he grew up playing at Raines High School.

Kindley’s goal remains the same: to continue to be a positive influence for his community.

â€œHow my mother raised us and how my family raised us, always give back,â€ he said. â€œSo it’s a blessing to come back to Raines, not just that, to come into the community, to have all the kids everywhere. “

They came from everywhere too.

Kindley and several of his footballing friends attended his first football camp on Saturday morning. Over 200 players of all ages showed up at the camp to be coached by a recognizable roster of football stars with ties to the region.

They did exercises. Passes caught. Ran cone drills. Worked on roofing skills. And if a camper hadn’t received an extra t-shirt, Kindley approached and found one for them.

â€œI also want us to remember a player off the pitch. There is no doubt that I want to be a great player on the pitch, but my biggest asset is after football, football won’t always be there, â€Kindley said. â€œI want others to see me as a good person in the community, a good person, a humble person, who gives back. So this is my biggest thing, this is my # 1 goal.

If Kindley coming back to town on a Goodwill Mission sounds familiar to you, it should. In February, Kindley donated laptops to 22 students at Raines, SP Livingston Elementary and SA Hull Elementary. These laptop donations added to Kindley’s jersey number with Miami.

“It’s great, man, just to be here and teach these young guys about football, and just have fun with them,” Campbell said. â€œThey have questions. They asked us questions and we gave them some tips on football and life itself. It is a blessing to be here. I’m glad Solomon invited me here and hope to do the same in my hometown.

Other big names who helped included were former Mr Football De’Andre Johnson, former Trinity Christian and Auburn star Jeff Holland and former Raines and University of Miami linebacker Michael Pinckney. The former players enjoyed being a part of the day just as much as the younger athletes.

Johnson, who graduated from First Coast as the all-time best passer in the history of the region, has a very visible history. He was one of the featured subjects in Season 2 of Netflix’s â€œLast Chance Uâ€ docuseries at East Mississippi Community College.

â€œA lot of the kids here have known me from ‘Last Chance U’ so they kind of see what I’ve been through, and they ask me questions and stuff like that,â€ he said.

â€œAnd obviously that gave me a platform to talk to the kids and you have to understand that I’ve been where they’re trying to go. Whatever advice I give [to them]listen to it or not. But I would say, it just gave me a bridge for the kids, gave me a way where they listen to what someone they see they might idolize or someone they see as a peer , to tell them what is right and wrong and just to help and guide them in the right direction.