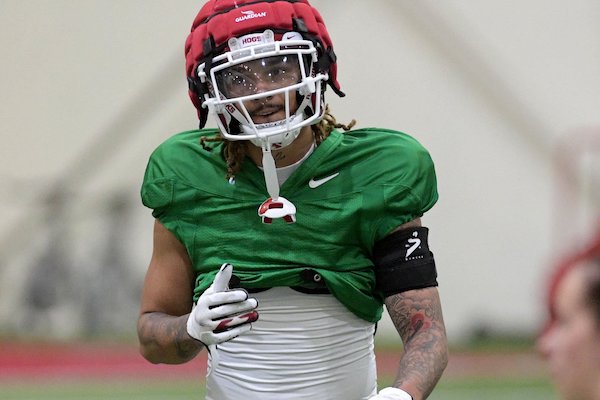 FAYETTEVILLE — Two of the University of Arkansas’ top transfers — five-star receiver Jadon Haselwood and five-star linebacker Drew Sanders — discussed what drew them to the Razorbacks during their first media appearances with the team on Thursday .

Speaking after Spring Training No. 8, Haselwood said his relationship with running backs coach Jimmy Smith and head coach Sam Pittman and the SEC call and offensive program the all drew to Arkansas. Smith was his head coach at Cedar Grove High School (Ga.) in suburban Atlanta a few years ago.

Haselwood also got a beater from former Razorbacks wide Mike Woods, who transferred to Oklahoma after Spring Ball in 2021 and was on the Sooners’ roster with him last year.

“I have this connection with Coach Smith,” Haselwood said. “He was my head coach in high school and I just felt like it really made sense for me to come here. Of course, I know Coach Pitt too, because I was committed to the University. from Georgia my freshman year, my sophomore year up to freshman year of high school. It was all just kind of connected that way.

Pittman said the appeal of the SEC was also strong.

“I mean, I feel like every school in the SEC is kind of like Southern hospitality if that makes sense,” Haselwood said. “Everything is more family. And mostly here, you know, just because I’ve known some of these people before I even signed here.

Sanders, a Denton, Texas native who transferred from Alabama, said a variety of factors led him to Arkansas.

“I just knew what I was looking for,” Sanders said. “I knew I wanted to be a little closer to home. A big problem was also staying in the SEC.

“Arkansas was first on my list as a place I wanted to visit. I kind of wanted to make that transition from playing with my hand on the floor to getting up a little bit. I thought I could fit into the program they run, so they were first on my list.

Sanders is rehabilitating a hamstring injury, while Haselwood is struggling with a left shoulder issue that has seen him in a green jersey with no contact since the Razorbacks returned from spring break last week.

“My hamstrings are fine,” said Sanders, who worked first-team with Bumper Pool all week after splitting starter time with Christopher Paul before Paul’s concussion last Saturday.

“With the swollen shoulder, I’m still pushing hard everyday, trying to train and give it my all,” Haselwood said. “So hopefully after Spring Ball I just have time to pull myself together. But right now I’m just fighting.

“KJ, he has a great passing pass. I can’t really compare these quarterbacks, you know, they’re all different styles, you know, different conferences. So you really can’t compare them, but I would say I played with great skill and I’m excited for what lies ahead for KJ and me.

Switch to the left side

On Thursday, Brady Latham worked primarily at left tackle, while Luke Jones moved inside to the left guard position where Latham started all of last season.

Latham was asked if the move could hold.

“I guess we’ll see,” Latham said. “Coach Kennedy got us moving all over the place. A lot of guys play a lot of different positions. I think in the spring it’s pretty fun trying new things like going from tackle to guard and you’ve got it seen with other guys. So I guess we’ll see.

Latham was asked about defensive line work in the spring, which produced a lot of pressure in the offensive backfield.

“They played really well,” Latham said. ” We had a lot of fun. So I think both sides of the line are improving. CT [Taurean Carter] was right here. He has an incredible camp.

Wideout Jaquayln Crawford will be out for the rest of the spring due to a broken leg he suffered in a car accident during spring break. Crawford had run mostly with the second group in the spring.

Tight end Trey Knox, who was also involved in a car accident during spring break, missed his fifth consecutive practice while recovering from a blow to the head. Knox attended practices in his white No. 7 jersey.

Offensive tackle Dalton Wagner (back) missed a second consecutive practice, allowing Ty’Kieast Crawford to spend more time with the starting unit on the right side.

Redshirt sophomore quarterback Malik Hornsby, wearing a sleek new Axiom helmet from Riddell on Thursday, landed some of the best strikes of the day. The Razorbacks worked their team periods inside the Walker Lodge due to strong, gusty winds in northwest Arkansas most of the day.

Hornsby threw a solid pass to leaping Harper Cole for an impressive 27-yard touchdown connection relatively early. Later, he found right winger Nathan Bax with a laser pass down the left sideline into tight coverage for a long gain. In the red zone work, he spun in a tight spiral towards Jaedon Wilson on a tilt for a touchdown. Hornsby had a good run on KJ Jefferson ground while working as a catcher.

As he did on Tuesday, linebacker Jackson Woodard had an interception down the middle against Hornsby.

Jefferson also had a solid day, finding Jadon Haselwood behind coverage for a 45-yard strike. He also connected with tailback Raheim Sanders deep in the field, as Sanders won a hotly contested fly ball with linebacker Drew Sanders.

Barnett has a connection to Arkansas coach Sam Pittman, as the two graduated the same year and played on rival teams in eastern Oklahoma. Pittman played at Grove, while Barnwell coaches at his alma mater, Jay, after he and his wife Leann lived in Centerton for a few years when Bentonville West’s football program started.

Barnwell said Grove was 2-1 against Jay during his playing career.

“Sam was a hell of a high school and college football player,” Barnwell said, referring to Pittman’s solid play at Pittsburg (Kan.) State.

When asked what he saw of Pittman’s work in Arkansas, Barnwell replied, “The enthusiasm, and the kids bought in, you can tell.”

Both kickers went 3-for-4 on field bases to cap the drive, with Cam Little and Jake Bates out for 51 yards. Little’s 51-yarder clicked the left upright with plenty of leg, while Bates was on the far left.

Little had to recover from a hard lick to do his kicks. The entire team rushed onto the field with the Arkansas fight song playing to simulate a last-second field goal situation. As Little tried to line up, he was run over by defensive tackle Taurean Carter, who tried to get to the other side of the line.

‘Hand of God’ shirt could fetch £4m at auction and become most expensive shirt ever – SportsLogos.Net News