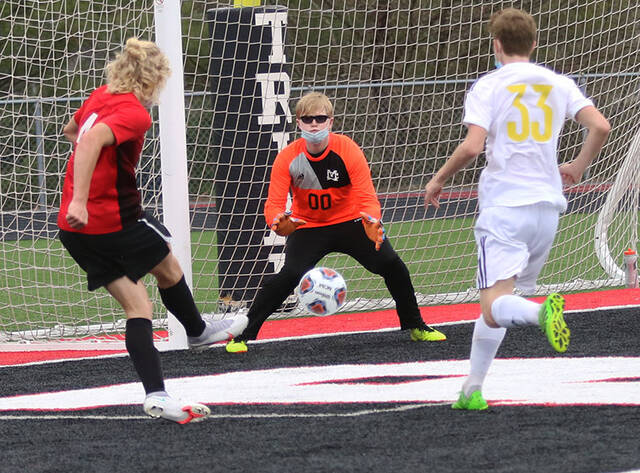 The Civic Memorial Eagles scored all the goals they needed and finished with eight in the first half on Wednesday and passed East Alton-Wood River 8-0 in a non-conference boys’ warm-up football game at the Wood River Soccer Park.

Justin Banoz and Nick Fiorino scored two goals apiece for the Eagles, who set their season record at 13-2-1.

“We got beaten up and tried to get guys back,” CM coach Derek Jarman said. “We’re getting back to that soon, but we’re just trying to focus on managing the load for some key components.

“We’re happy with the level of effort and hard work these guys are willing to put in.

Fiorino and Bryce Davis combined on WC’s first two goals. In the second minute Davis helped Fiorino make it 1-0 and a minute later the same combination made it 2-0.

Scottberg now has 11 goals and 18 assists this season. Davis has 11 assists and 23 goals.

In the 16th and 25th minutes, Justin Banovz scored two consecutive goals. He was assisted by Noah Huth in the 16th minute, bringing the score to 7-0 and ensuring that the IHSA’s leniency rule would come into effect in the second half, cutting playing time in half, from 40 to 20 minutes. .

Banovz’s 25th minute goal was assisted by Ethan Miller who scored the goal.

“From next week it’s the home stretch,” Jarman said. “Four games for Valley so we need everyone to come back and do our best as we look into the playoffs.”

CM is expected to host Freeburg in a non-conference game at 6 p.m. Thursday at the Bethalto Sports Complex. The Eagles will return to the Mississippi Valley Conference game on Oct. 5 in Highland.

Jersey 8, Roxana 2 – In a non-conference game at Norman Lewis Field in Roxana, the Jersey Panthers moved away from a 1-0 halftime lead with seven goals in the second half.

The Panthers’ other assists came from Dax Goetten, Evan Lacy and Skyler Crull.