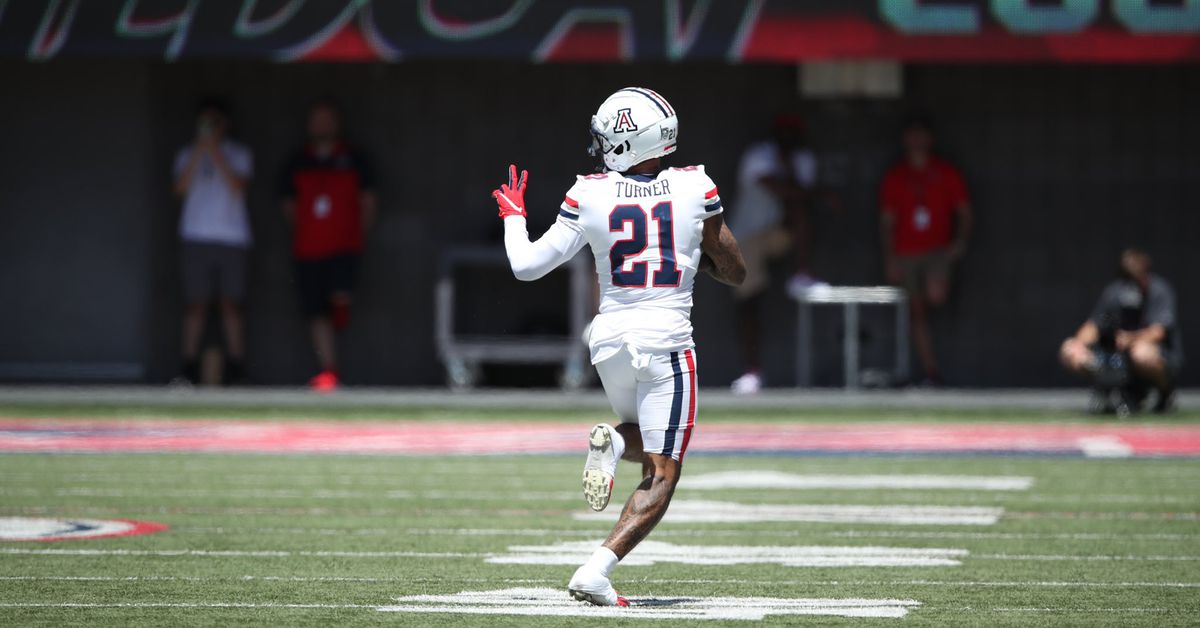 Arizona wrapped up an important part of the offseason on Saturday afternoon with its spring game inside Arizona Stadium. Several thousand fans, including more than 250 former UA players, watched as the red team cruised to a 24-21 win over the blue team while those closest to the pitch were regularly sprayed with water guns and hoses .

The offensive touchdowns were scored by freshmen Keyan Burnet, A.J. Jones and Tetairoa McMillan as well as Arizona women’s basketball star Sam Thomaswhile Jaxen Turner had a 90-yard pick-six on a pass from Jordan McCloud and Tyler Loop connected on a 45-yard field goal as well as on all five extra point attempts.

The made-for-TV scrimmage, which included a running clock and 12-minute quarters, was over in less than two hours. Then coach Jedd Fischquarterback Laura’s Jayden and security young christian discussed the course of the Spring Game:

Fisch on Spring Game injury prevention after Jamarye Joioner was injured late in last season’s game: “We tried to stay healthy, which we did. I didn’t see any injuries today which is a really good positive for the summer training program.

On his assessment of the team based on this scrum: “I know we have a long, long way to go, but I think we had playmakers today, which was fun to see. And then we just have to improve here in the next four or five months.

On being happy that the defense recorded 25 takeaways in the spring (including two on Saturday) while also being concerned that the offense is turning it around: “We’re trying to make sure our quarterbacks don’t turn it over either, so it’s a double whammy. So what we want to do is understand that we have to protect the ball and we have to take the ball. And in turn, this is going to happen in these practices. Because what would be awful is if we didn’t have takeout. We went to training camp last year and had two picks. We can’t have it, we have to see it. I like the way our guys attack the ball, and I’m proud of our defense, and we have to keep cleaning up offensively. And don’t give away the ball. We will undertake to do so.

On multiple pass-through interference calls: “We had the Pac-12 officiating team, so we had a team that we will have to deal with. And I think it’s really good for our team, to be able to see that some of the calls that aren’t made in practice are. Our guys need to understand that when you’re playing that much one-on-one coverage or 3-deep zone, you can’t assume that every play isn’t going to be a PI, which happens in practice. So I thought it was really good for our guys to see some of those calls being called. I think it’s really good on film to be able to show these guys that hey, it’s a penalty, even if it’s not called up in training.

On freshman QB Noah Fifita: “We say the three biggest traits of a quarterback are decision-making, timing and accuracy. So for me decisiveness puts both one and two. What impresses me is that he masters the attack perfectly. He has excellent caucus control. And when you see him play, I mean, the ball goes out of his hand, flies out of his hand, but the guy knows exactly where to go with the ball. And he does it with great rhythm and timing.

About Laura and Fifita recovering the system: “I think they both did a great job learning the system. I think what they did was they really embraced it. We didn’t cut anything. We were able to kind of try to find some of their strengths and play to their strengths. But I think in general I think they did a pretty good job of picking things up. We had nothing to remember. »

On Thomas’ TD take: “Threat of red zone. You’ve been all over me all spring about red-zone height, red-zone threat, length, and she’s shown she has the ability to do it.

Not yet officially ending quarterback competition: “We are not going to release a depth chart (post-spring). But like I’ve been telling you all along, I mean, we have one, two and three and you’re lacking in practice. There’s so many position groups, you start naming a starter in the spring, and then it’s like, well, who’s going to be the starting back or who’s going to be the starting receiver? I think our team has a very good idea of ​​where we are coming from. I think Jayden has certainly proven that he can lead our team.

On what the defensive newcomers arriving this summer – including eight new signings – will need to learn when they show up: “I think we are going to play on several fronts and on several covers. So what you need to do if you are a multi-cover defense, you will need to be able to adjust multiple formations. And what you have to adapt to in college football is the tempo, different formations, unbalanced formations, exotic formations, which are some of the things that you don’t necessarily have to adapt to as much in the NFL. So I think Johnny (Nansen) has a good understanding. He coached college football, the Pac-12 most of his career. So I think these kids just have to keep believing and trusting. They must have good zone eyes if we play in the zone, they must be aggressive with the ball when we play against the man.

On jersey no. 1: “Yeah, there is one to win (in attack). I think there’s a certain etiquette when it comes to number one, which Jalen (Harris) played with all last year. Never miss a game, never miss practice. He will therefore retain the number one in defense. He has been here for six years. And then on offense, this thing is up for grabs right now and there are a lot of people asking for it. We will wait for the camp.

On QB Will Plummer: “Will had to get his shoulder repaired probably back in the Cal game. We tried to take a more conservative approach early on, as it’s his throwing shoulder, not something you would necessarily want to have to fix, but we made the decision last week to fix it yesterday, and to all accounts it was successful, but now we just have to wait and see. I expect it to come back someday, probably late August to late September, somewhere in that range.

On OL Jacob Reece: “Right now, at this point, what he said is actually where we are. So it’s all been diagnosed coming here. I can’t tell you how much appreciated I am from our medical staff for the “I found in his medical on the day he arrived here. We immediately went into the protocols. And at this point, a decision needs to be made once all the tests are done. We should have a pretty good feeling within seven to next 10 days where we will be heading.

Young explains how the defense will be better in 2022: “Running more zone, and things like that, will help us as a secondary defense and as a whole, to create more turnovers. When you create turnovers, you win. I feel like that’s the biggest difference.

On Turner’s pick six, even though it’s the other team: “I was happy for him. I told everyone in high school before the Spring Game, I hope we all do well.

On Arizona having a rolling chair: “He sits in the defensive meeting room, so whoever gets the most turnovers can sit there. I think we could bring it here on the pitch. It is red with gold on the outside. A throne type thing.

Why McMillan has drawn so many pass interference penalties: “He’s 6-4, can catch the ball outside his body. It’s not easy to keep.

Have a good crowd for the Spring Game: “It’s eye-opening for me. There is so much more energy.

From Laura on throwing an interception in her first practice: “Second game, we were all off the whole game, I mean I shouldn’t have thrown that, so it’s on me. I’ll take 100% of that.”

On the play of other quarterbacks: “Overall, though, I felt like everyone was doing good. Noah did really well, McCloud did really well today too. Gunner (Cruz), for only doing two 7-on-7 reps all spring, he actually did well.

On how the offense can avoid turnovers: “Better decision making, and just get it on the same page and the same receivers. Once we’re on the same page with everyone on how we run the routes and everything I feel like the sky’s the limit for our attack. We obviously had glimpses of what our defense can do.

On the importance of player-led training leading up to the start of pre-season camp: “Really important. Just to show everyone that we can lead as a group, the quarters group, we can lead, and just build confidence in the quarters room as a whole. We understand what we’re running, we can go over there and teach it to the other guys.

Comfortable playing under center: “The first week was probably a bit difficult, and the start of the second week was a bit difficult here and there, and then after that I feel like I did really well under the middle.”

The last time he played football with a tight end: “Crazy.”

On Fisch not naming a starting QB or posting a post-spring depth chart: “That does not bother me.”